I can't say I hadn't been warned. My mate Sean had completed the 153km Liège-Bastogne-Liège (LBL) challenge last year and all of his words were coming true. I just thanked my lucky stars I hadn't entered the utterly bonkers 273km route.

We had negotiated our way out of the industrial town of Liège through a myriad of traffic lights and were climbing into the heart of the Ardennes on an unclassified hill that in any other sportive would have been on the list of challenges. Not so in this monster of a Spring Classic. 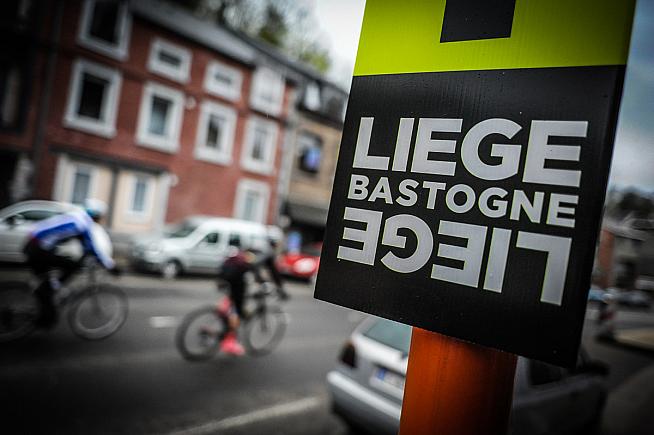 There and back again. Photo: Sportograf

Luckily for me, Sean had given me the heads up that this was typical of the route. Although there were only seven categorised climbs, other hills and drags litter the parcours, making it one of the hardest of the spring sportives - even the medium distance accumulates 2,705m of ascent. If that is not enough for you, then the 273km long course offers nine climbs with 5,287m of climbing! I told you it was bonkers. There is also a 75km route; three climbs, packing 1,184m uphill for those looking for a gentler taste of this iconic race.

Over the last three years, a desire to complete Spring Classic challenges has grabbed me. There is something special about experiencing the courses of the Monuments, following in the same tyre tracks as my cycling heroes that I've watched and read about from childhood. Having completed the Paris Roubaix and Flanders challenges, it seemed only natural to enter the LBL. 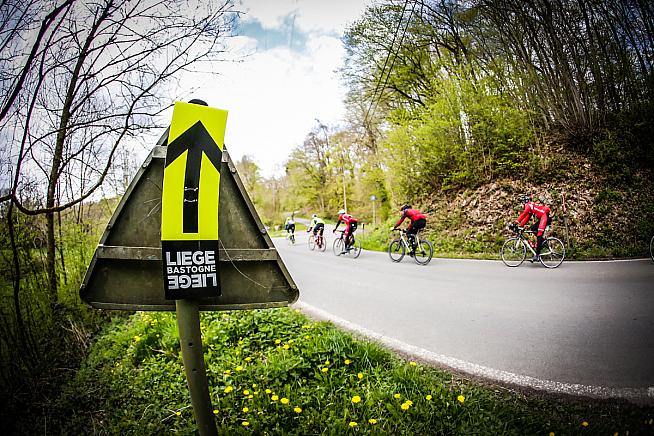 Liège-Bastogne-Liège, or La Doyenne (the Old Lady) as it is often referred to, is the oldest Monument, having being started in 1892 by a newspaper. L'Expresse was published in French to cater for the French-speaking Belgian population or 'Walloons'. The route has always stayed in the southern French-speaking part of Belgium and the present course passes through the two western Walloon provinces of Liège and Luxembourg. The second half of the race contains the most climbs - most of which are to be found in the 153km challenge course.

The other words that unfortunately came true were those of the weather forecaster. It wasn't long until we were cycling in 'passing showers' that took over three hours to completely clear. It was grim. I had hoped to enjoy views of the beautiful environment the Ardennes is famous for, but there was nothing for it but to hunker down in the cold, wet, misty conditions, fantasising about Belgium hot chocolate and waffles. 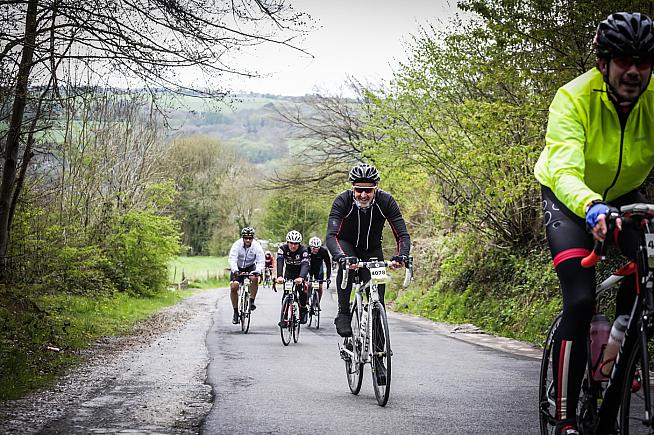 I had entered the event through Baxter's Cycling Trips, who had supported my other Spring Classic adventures, and I was pleased to hook up again with Dean who had ridden with me at Flanders.

Dean and I stopped briefly at the first well organised feed stop in Bosson. No hot chocolate, but plenty of waffles with small sachets of honey to drizzle on top. Delicious. It didn't take long to feel really cold, not surprising as we were both wet through, courtesy of the penetrating drizzle. So, avoiding death by hypothermia, we set off for the first official climb of L'Ancienne Barriere. To be honest this climb was no worse than the ones we had already experienced and almost came as a disappointment! 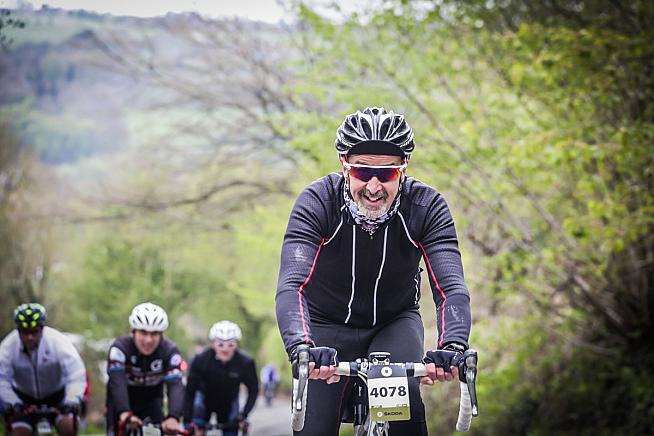 This looks suspiciously like fun is being had... Photo: Sportograf 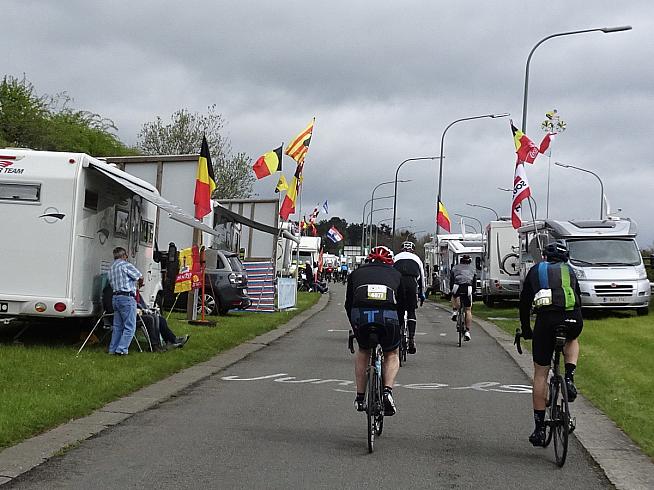 Any disappointment was soon forgotten however, by a lovely if cold descent. With the weather slowly picking up we rolled into Stavelot via a very short cobbled section and towards the second waffle, fruit and cereal bar bonanza that was located in the town's sports club car park. Following our near death experience at the last stop and also from Sean's advice about how quickly the Côte de Haute-Levee appears, we decided not to stop other than for a quick comfort break.

The route forced us to retrace our tracks a little before turning onto the Haute-Levee. For me this marked the start of the steeper climbs and the quick succession they would appear in.

For the first time I engaged bottom gear, which didn't bode well seeing I had another five climbs to complete! The Côte de Haute-Levee is approximately 3.5km with a maximum gradient of 12% and an average of 5.6%. The steepest section is in the first half of the climb, with the final section being more of a drag. 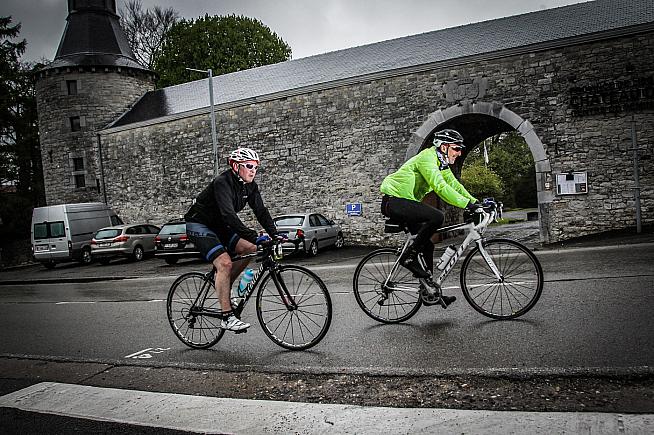 Next on the list was the Col du Rosier, roughly marking the half way point. Along the ten kilometres to the foot of the climb, another member of our group, Giles joined us.

Climbing the 4.4km Rosier with an average gradient of 5.9% and maximum ramps of 13%, I had time at last to admire the views on this tough climb as I slowly churned my way up the unforgiving gradient. The virtually traffic-free road wound its way up through trees and lovely wooded areas. 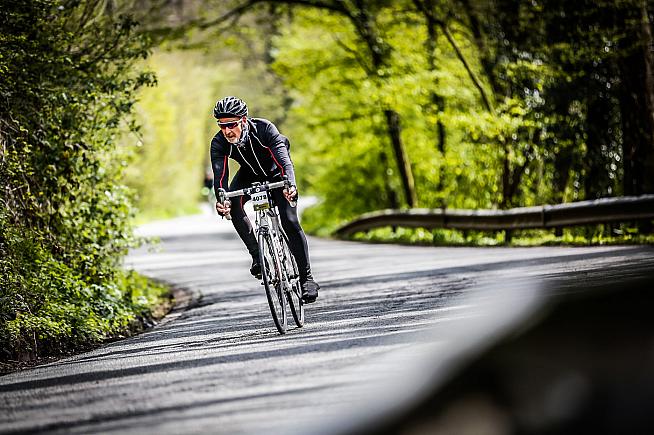 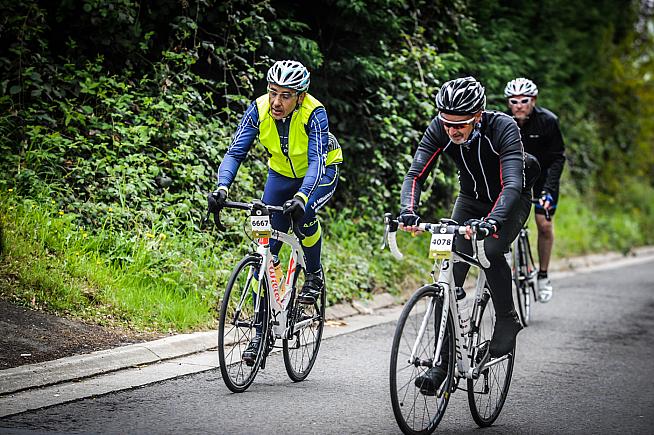 Although it had stopped raining, I was just as wet on the inside of my supposedly showerproof jacket as I had been on the outside, so at the top I stopped to disrobe. It was apparent others had had the same idea and disappointingly the verge and drainage ditch were sewn with discarded empty gel packets and other wrappers. Why some cyclists think it is okay to litter the environment in this manner is beyond me, it gives us all a bad name.

It must be said that the reward for all the climbing was the wonderful flowing descents. All to be savoured. I tried to put the thoughts of 'We are going to pay for this' out out of my mind as I shot downhill round sweeping bends and onto the next skyward challenge.

Mavic support at a feed stop.

We conquered the Col du Maquisard with ease, a mere 2.5km 5% climb before descending again, turning sharp right and beginning of the legendary Cote de La Redoute. Officially it is only 2km long, but with an average gradient of 8.9% and ramps of 20% it felt a lot longer. I had always pictured the climb to be in the middle of nowhere, so I was surprised to find that a main road runs parallel to the lower slopes.

Along these slopes we passed through an encampment of motorhomes all set up to watch and support the professional race the following day. It was a great atmosphere as we cycled past fluttering flags, the smell of barbeques and the sounds of fans shouting encouragement.

And did we need it! Turning left away from the main road the route starts to ramp up. Painted names of riders appear on the road, several in honour of Philippe Gilbert as the gradient slowly increases. However, the steepest parts are yet to come. Just over half way and past the 1km sign, the road ramps up again to its maximum, which forced me out of the saddle. To my right and ahead I could see the inflated finish arch which spurred me on to give a little more effort. Dean and Giles had pulled ahead by this stage, leaving me to battle the hill alone. Well, actually amongst a multitude of other struggling cyclists. One last push on the final ramp and I crossed the line. I heard a beep reminding me this was one of three timed climbs, the others being the next consecutive climbs of Cote de la Roche-aux-Faucons and Cote de Saint Nicolas, all of which are filmed as well. 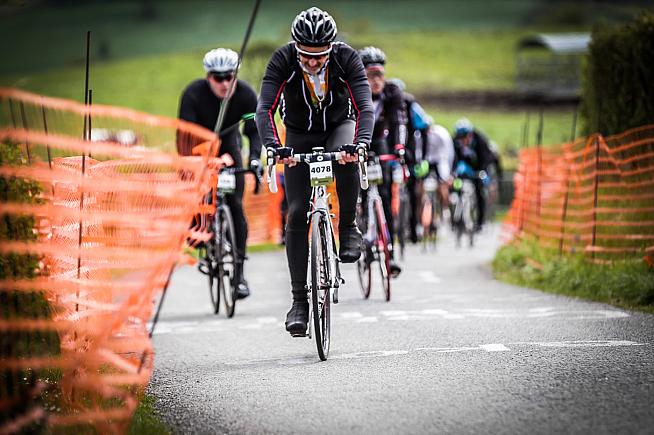 The third and last waffle and honey buffet was at Spirmont, which is surprisingly positioned on a hill. Unfortunately, we encountered some grumpy motorists as we spun up (literally) the busy main road from Spirmont and onto the penultimate (or so we thought), 11% and 1.3km climb of La Roche aux Faucons, another tough old climb, and finally back to Liège. This was via a lovely downhill section. However, at the T junction to the main road, we witnessed riders taking enormous risks; riding straight out into the road without stopping or looking, forcing motorists to change lanes to avoid collisions. This busy junction in my view should have been marshalled, but there is no excuse to put others at risk let alone oneself. Maybe the riders exhibiting this behaviour were the same selfish ones that discarded their rubbish onto the verge and roadway.

Most of the ride had reminded us of the picturesque hills and landscape of Yorkshire. However, the last official climb of Cote de Saint Nicolas had a totally different feel to it. The 1.2km segment with a maximum of 17%, winds its way up a poor area of Liège that looks and feels no different to the deprived areas seen in any of the larger cities of the British Isles. 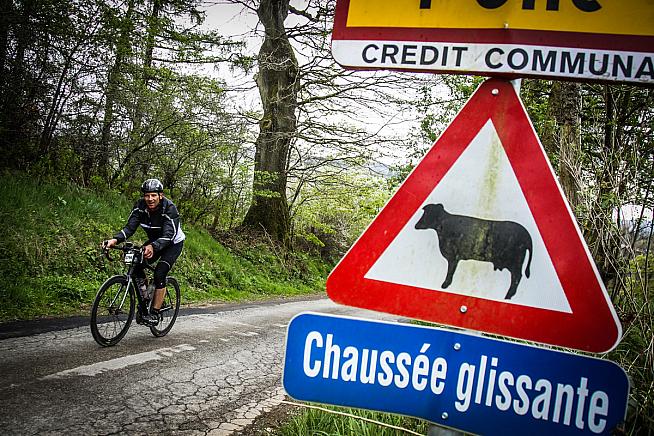 We stopped at the top for a short breather, relieved the climbing was over and that we still had wheels on our bikes. But what we were all forgetting, was that the 'Arrivee Officielle Pro' as marked on the road map stickers on our top tubes, was uphill! We all should have known this from the many times of watching the finish of the race on TV.

Yet, before we experienced the joy of climbing the 'Official Professional Arrival' there was the small matter of a few short flat cobbled sections to master. They came as a bit of a surprise to me, and just as I was thinking that at least there were no cobbled climbs or indeed cobbled sections of any note on this particular classic.

But here they were, in all their splendid, uneven, rutted glory. The icing on the cake. How I hated trying, yet again, to float over them. Unsurprisingly I got dropped by Dean and Giles and only caught up with them due to them kindly slowing down and waiting for me. 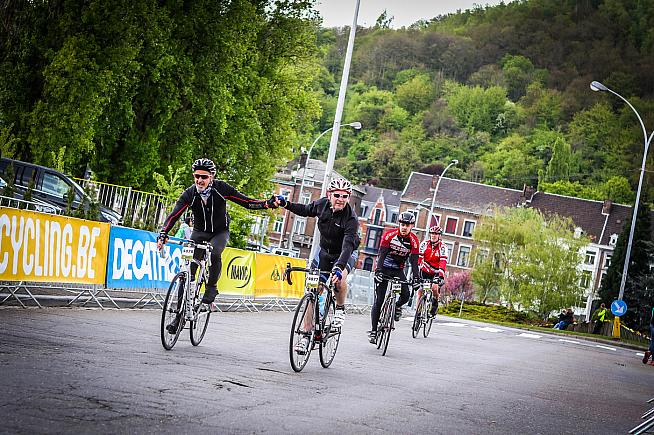 We made it! Photo: Sportograf

And so to the 'Arrivee Officielle Pro'. To be honest the climb didn't seem that bad, though my attention may have been distracted from dealing with busy traffic and the inconvenience of having to stop at traffic lights halfway up the hill.

We turned off before the official finish line, but to have experienced the terrain that the professionals have to deal with at the end of their race gave us all a deeper appreciation of their strength and fitness. Indeed, the Italian rider Moreno Argentin, a four-time winner, said "Riders who win in Liège are what we call 'fondisti' - men with a superior level of stamina."

Eight kilometres later we rolled into our finish area, congratulated ourselves on our levels of endurance, collected our free T-shirt, bought medals and best of all, received a free massage.

Amazingly for such a large event there was only a short wait of approximately 15 minutes before being directed onto one of the eight massage tables.

Muscles suitably pummelled, all that was left was to hand in our timing chips for a generous €5 refund that was immediately spent on celebration beers - Belgian, of course.

LBL has a reputation for being hard. Cycling Weekly said of the race: "In purely physical terms, this is probably the toughest classic: the climbs are long, most of them are pretty steep as well, and they come up with depressing frequency in the final kilometres." And indeed, the 273km challenge course would fall under this category.

As for the 153km route, without doubt it was one of the hardest sportives I have encountered, but for me the Paris Roubaix challenge holds the title for the hardest and most brutal. My opinion may be biased as I hate cobbles, and also I didn't attack all the ascents with gusto due to the recommendation of holding something back for the last climbs.

But as I say, that is just my opinion. There is only one way of finding out if you agree...

The Liège-Bastogne-Liège Challenge returns in April 2018. Sign up to Sportive.com to be first to hear when entries open.