"Feed Station ahead" read the sign. I was looking forward to it. 80 miles into my second century ride in as many weeks and fluid supplies on board were running low. I'd just got to the top of Cheddar Gorge. The previous feed station, staffed by the Army Cadets, was a distant memory. I rounded the corner looking for the usual gazebo and saw... seven other cyclists, a motorcyclist, but no feed station.

The cyclists turned out to be Lyndsey, who I had cycled with in the first part of the course, her six male work colleagues and her boyfriend on the motorbike. It was only half past three. The cut off back at the finish was 5pm and we were all confident of covering the last 20 miles within the time, but there wasn't a banana or flapjack in sight. 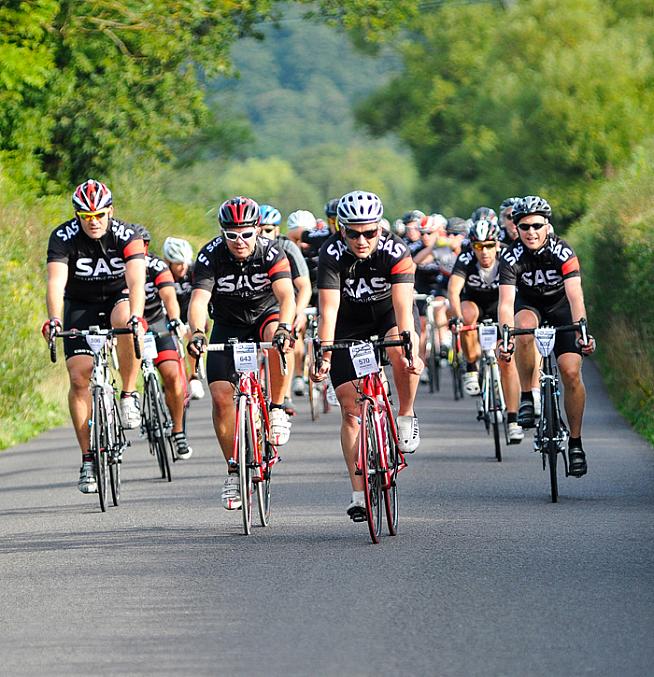 The SAS - aka the Salt and Sham Cycling Club - on the road.

I tagged along with the others for a bit before the group split up in the Mendips as we headed back to Keynsham. Once back at the Bristol Belter base, well within the cut off time, I asked the organiser what had gone wrong. "I don't know," came the reply, "the Cadets were doing one feed station and the SAS the other."

My mind started racing. Had it been some sort of extra test, with the soldiers from one of Britain's elite units camouflaged in the bushes, hoarding our food rations until we tracked them down using only the position of the sun to guide us? Or had the SAS abandoned their posts, throwing caution and discipline to the wind?

The truth turned out to more prosaic. SAS turned out to be Salt and Sham Cycling Club - or, to give them their full title, the Saltford and Keynsham Cycling Club. However, no further information was forthcoming on the day as to why they had deserted their posts and whether they would be court martialled. 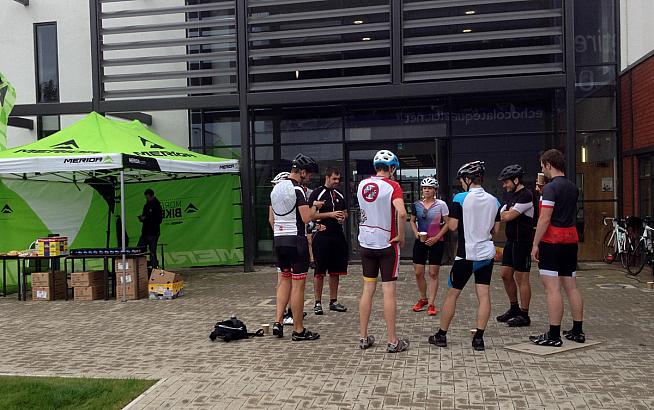 Event HQ on the site of the old Fry Club in Keynsham.

I'd ridden the Bristol Belter before but not for a couple of years. Now sponsored by Merida Bikes, it was in its usual calendar spot of the first Sunday in September. The first year I rode it the base had been in North Somerset, but it had since moved to a new venue in Keynsham, half way between Bristol and Bath. This year it was still in Keynsham, at the same venue, but development had made it unrecognisable.

Last time around the Cadbury factory had just shut and the ancient Fry Social Club was the start/finish point. This year I arrived to find the Fry Club had gone and a modern social club and sports venue stood in its place. The surrounding area was a mixture of brand new houses and building sites for more homes. 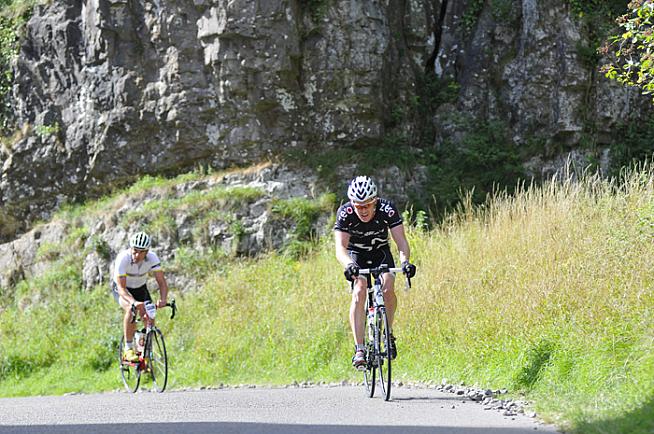 The scenic route took in country roads and the Cheddar Gorge.

Parking wasn't a problem in the club car park and registration was inside the club itself. Those on the 100 mile Full Belter could start from 7am with everyone else going off between 8-10am. The 44 mile Mini Belter took in a loop around the Mendips with 1100 metres of climbing. The Short Belter over 63 miles was in a similar area but also took in Cheddar Gorge to add up to 1650 metres of ascending.

The Full Belter was 100 miles including the Short Belter course, but with a preceding "warm up" north of Keynsham around the edge of the Cotswolds. Entry prior to the day was £29 (£24 for the Mini Belter). I was told that there were lots of on-the-day entries. The weather was dry with some wind promised. 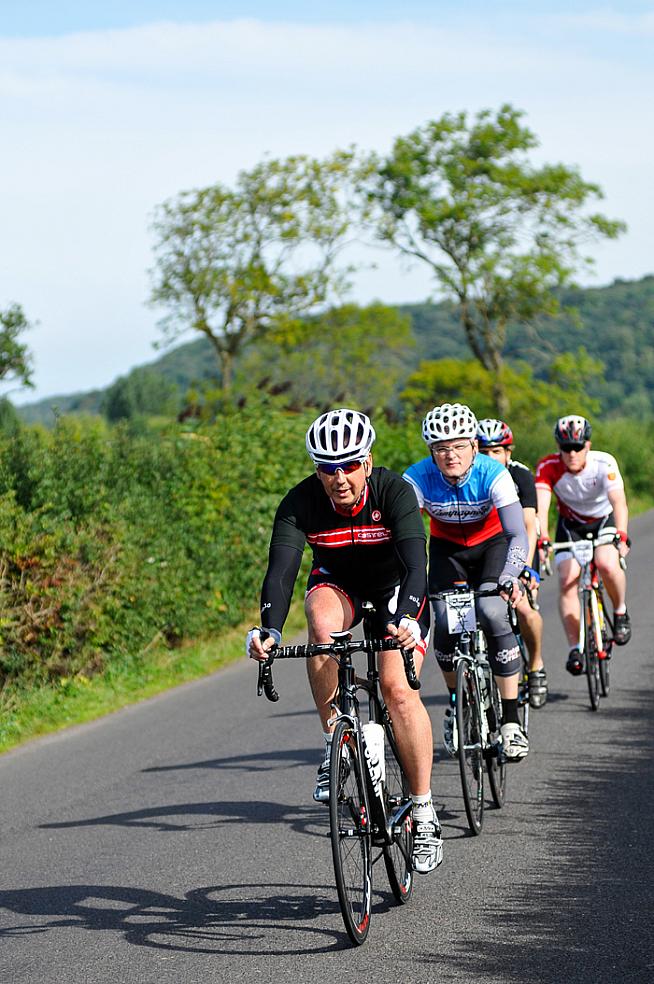 The warm-up course was marked by black arrows on a red background, which were occasionally hard to see. This compared with white arrows for the other routes which were clearer. The busier roads around Keynsham gave way to quieter country lanes through Pucklechurch, where the Tour of Britain had passed only a few days before. I didn't see any other riders after this point and rode through the chocolate box but almost deserted village of Castle Combe on my own.

Shortly after that another cyclist came past me and we ended up riding the rest of the warm-up route together back to base at Keynsham. Lyndsey's colleagues had left her behind due to mechanical problems which meant her chain was stuck in the largest front ring. It turned out she was on her first sportive and had only had 5 and 1/2 hours' sleep after going to the Massive Attack gig in Bristol the previous evening. Despite that we made it back to Keynsham still relatively full of beans. About a third of the climbing had been completed including a steep short section out of Pucklechurch.

Lyndsey's work mates were waiting for her back at base, which also served as the first feed station. The mechanic soon had her bike fixed. I left them to it whilst I refuelled. There was tea and coffee but no water that I could see. When I asked I was told that it was straight out of the taps in the toilet. There may have been energy powder but I used my own tablets. The benefit of returning to base meant that I could change some clothing and discard some items as the day had warmed up. 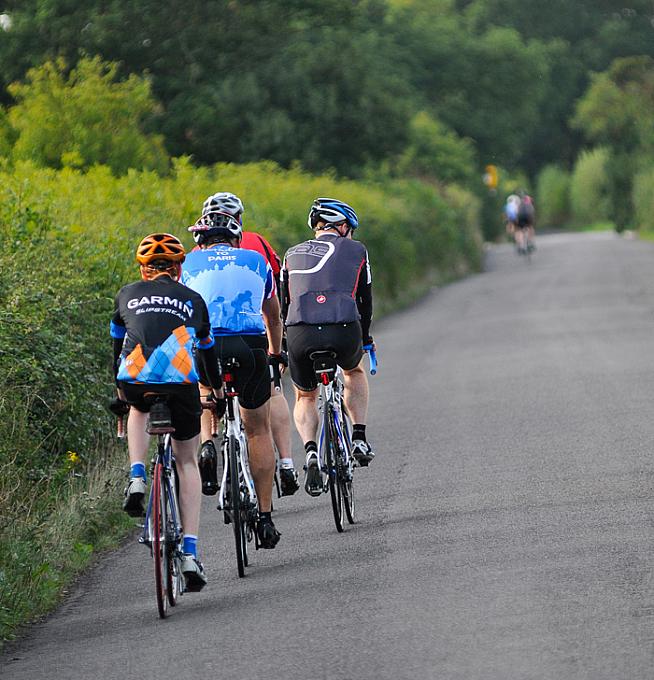 I eventually left and rolled over the timing mat only for one of the young helpers to immediately point out that I had a flat rear tyre. My first in two years, but not a bad time to have a flat as the mechanic sorted me out in double quick time. I was back on the road within minutes but, slightly distracted, I missed a turning and went about half a mile the wrong way before realising my error.

I didn't see anyone else for a long time as the road went up and down along single track lanes heading down towards Wedmore and Cheddar. There was some excitement as I approached a T-junction with single lane roads in each direction. Cars were queued back along all three roads with no one giving way at the pinch point. I had to dismount and carry my bike above my head to get round the whole melee.

The Cadets' feed station around 60 miles was a gazebo by the roadside. There were no toilets and all the cake had been eaten, but there was still plenty of crisps and other food. The ensuing section took me up Cheddar Gorge and then on to the end. 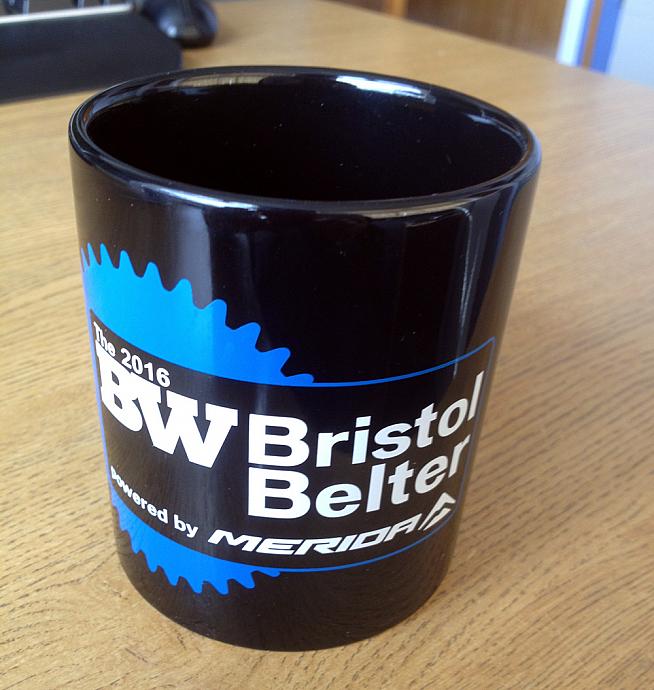 Souvenir mug at the finish.

Back at base there was more of the same sort of food as at the feed stations, and all finishers went away with a Bristol Belter mug. I enjoyed the event as the course was well designed and again featured some unfamilar roads in the Mendips, despite that being my local area. The differences in the two sections of the Cotswold Edge and the Mendips was also a good contrast.

The only downside was the feed station issue. I know at least 10 of us missed out. I had kept some water in reserve and always take my own gels but for some it was a case of tightening their belts, so to speak, and hoping for the best. However, when you are planning a long ride on a sportive you need to be confident that the feed stations will be as planned in order to get the best experience and give yourself a chance of finishing. Apart from this glitch the Belter was a good day out and it is to the organisers' credit that they keep freshening it up and introducing new ideas and routes.