Tour de Glastonbury: fun (and fundraising) on the Mendip Sportive for MS

MS4MS looks more like the name of a hastily assembled X Factor ensemble than a cycling event, and at the Mendip Sportive for Multiple Sclerosis it was time to channel my inner rock star; while the top bands were indulging in pre-Glastonbury warm-ups to tighten up their performances, I was warming up on the roads around Glastonbury on my bike. To make things even more rock and roll, Peter Graham, the organiser of the charity event, is also the landlord of the local pub where live music and drinks were laid on at the end of the ride.

Peter runs the George Inn at Croscombe, a well-heeled village just outside Wells, Somerset. He organises a monthly informal cycle ride for like-minded locals, and for the last few years he has also run an annual charity sportive to raise money for multiple sclerosis. His interest in the charity originated from getting to know two people in the village whose lives are affected by MS.

A team of riders committed to fundraising could enter the sportive for £12 each, while for individual fundraisers the price was a very reasonable £15. Standard advance entry without any further fundraising commitment was £20, rising to £25 on the day. Although the event was listed on the British Cycling website, Peter would be first to concede that publicity is not his strong point; on the day around 25 riders set off from the start point at Croscombe Village Hall. The hall was open in order to access the facilities and there was plenty of room in the car par. Imogen, Peter's daughter, made sure everyone was signed in and given a safety briefing sheet. 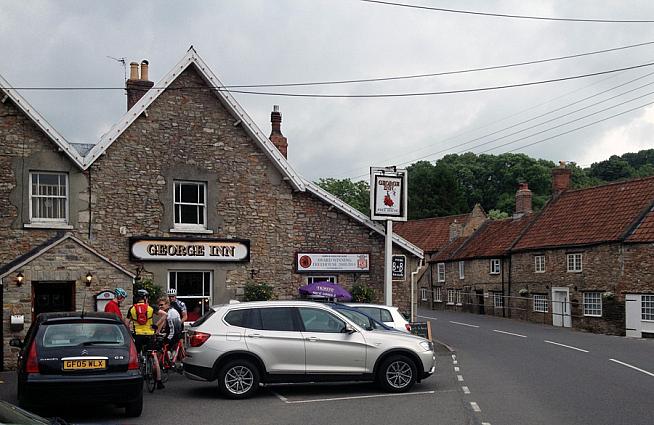 The George Inn plays host to the Mendip Sportive for Multiple Sclerosis.

There were three combinations of routes to choose from. The shortest was the 60km Easy Cheddar incorporating 440 metres of climbing. The middle route was dubbed the Chew Valley Challenge over 100km (60 miles) covering 780 metres of climbing. Both routes covered the same course for the first 25 or so miles to the top of Cheddar Gorge before diverging and returning to the finish at the George Inn (located a short walk from the village hall). The third route, christened the Monster Challenge, involved completing both routes consecutively and, consequently, two ascents of Cheddar Gorge.

Proposed start times were 8am for the Monster Challenge, 9am for the middle route and 10am for the short route. I arrived around 8.30am and groups of riders were forming and starting as they wished. I took to the road guided by Peter and his friend Steve, who was riding a 1980s racing bike that he had restored and built the wheels for himself.

Maps of the courses were available on the event website on Google maps, and some riders took photos on their phones. Unfortunately there was no GPS map to download of the route. The signage was a first for me as instead of the usual laminated signs cable-tied to lamp posts, directional arrows were painted in yellow and white on the road at key junctions. Peter had been out the previous day so the markings were fresh, but it took me a bit of getting used to.

Initially I didn't have to follow the arrows as I just went on the pan-flat Somerset Levels with Peter and Steve. Glastonbury Tor was clearly visible, and it was 16 miles of horizontal country lanes before we even went up anything resembling a slope. The weather was dry and we fairly flew along the lanes.

Around 23 miles in we cycled into Cheddar and the feed station that was laid on at the foot of the Gorge. Volunteers had been there since 9am collecting donations from tourists as well as providing refreshments for the riders. The feed station was based outside a small café and there was water, bananas and flapjacks available for participants. A nearby Costa branch provided the toilets, perhaps unwittingly. 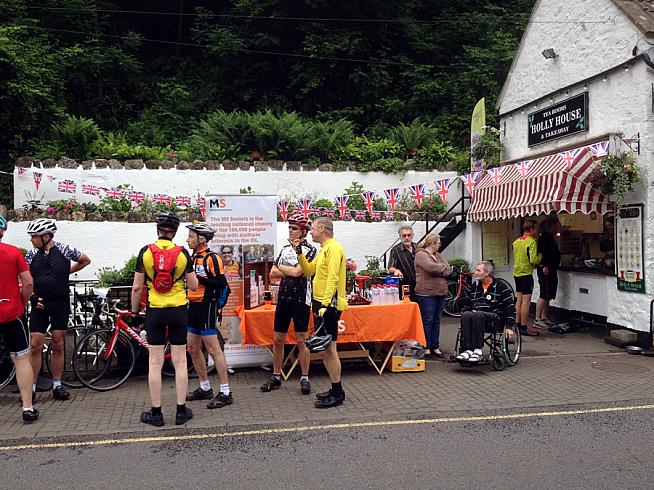 Tucking in at the feed stop.


Energised after our break we then faced the big climb of the day up Cheddar Gorge. I really enjoy this ascent, as after a short steep section at the bottom the rest of the climb is less severe and just requires you to settle into a rhythm at your own pace. At the top of the climb was the first split in the routes. Everything to up to that point was the same, so riders on the long route would have faced it twice. We turned left and traversed some open countryside before descending nearby Burrington Combe. This was a first for me as I'd only ever cycled up it before.

The route continued to head north along a single track country lane up towards Chew Valley Lake. Some more riders had joined our loose group so there were around seven of us, making for an enjoyable ride. The route became a little more undulating with the odd short climb. After we reached Chew Magna the course headed south again back towards Croscombe.

Peter and Steve paused for a while to wait for any stragglers so I carried on with some of the other riders. There were some sections on main roads but the traffic was light. On the last part of the course I found myself cycling on my own, and it was only then that I really was trying not to miss a directional arrow. They weren't as easy to pick out as signs at eye level. Although I never took a wrong turn there was a point outside Wells where I wasn't sure of my bearings. Other riders coming past as I tried to call up the map on my phone reassured me I was on the right track.

The last part of the route went through Wells before ending at the George Inn. There were friendly faces to greet us all. The band were warming up, as was a feast of sausages and burgers on the BBQ, so it was all set for a good party and more fundraising. Unfortunately I was unable to stay for the duration. 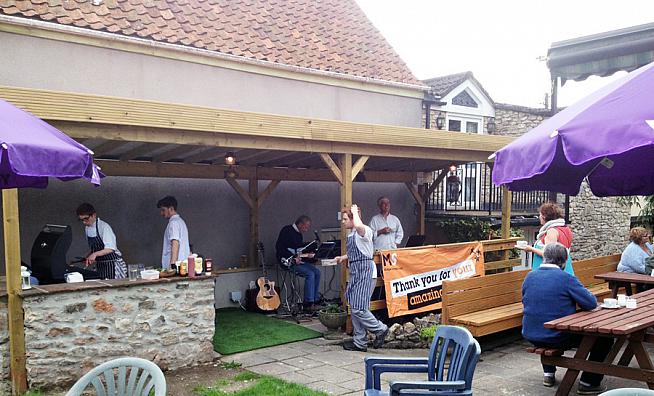 The band warms up as the post-ride party gets underway.


This was a different type of sportive for me; a hybrid of a sportive/social ride/charity event. The small numbers gave it a friendly, intimate atmosphere. While I can't foresee this ever being a massive event - and I suspect Peter wouldn't want it to be - it could certainly accommodate more riders without a problem, and it deserves to. The road markings take a bit of getting used to but they do the job. The reassurance of a GPS download of the course would have been a helpful safety blanket and I imagine would be relatively easy to organise for future editions.

The route changes every year for this event, and while it is not onerous in terms of climbing it is a good workout and worth a look, especially as it also raises funds for MS. An extra incentive for Raphaphiles is that Croscombe is only a ten-minute drive from the Rapha Archive store. A perfect opportunity, then, to get in a good ride, do your bit for charity and treat yourself to some new kit - all on the same day.