As I sit down to write about the 2016 Tour of Flanders, I realise it is exactly one year ago that I first experienced riding the cobbles of northern Europe. At approximately 16:00 hrs. on April 11th 2015 I crossed the finish line in the famous velodrome at Roubaix in euphoric mood. I had survived the punishing and brutal pavé, and the sense of cycling on some kind of pneumatic road hammer had come to an end.

My more experienced friends, some of whom have an addiction to riding the Spring Classics, recognised this was the moment to encourage me to commit to riding the Tour of Flanders. With the promise that the Flemish cobbles were a lot smoother, I signed up for the Ronde Van Vlaanderen Cyclo 2016. 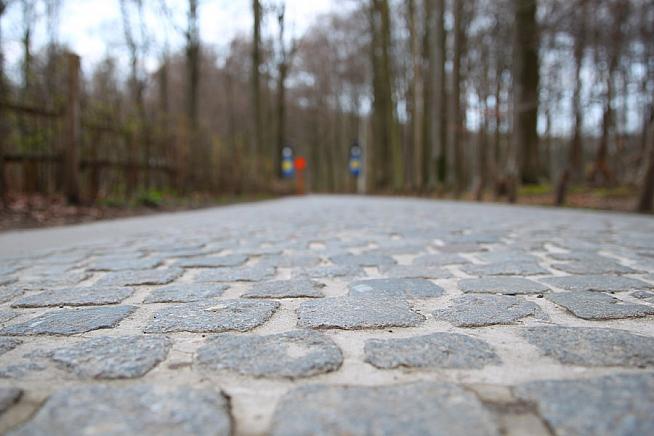 A close up of those smooth Flemish cobbles. Photo: Sportograf

I had made the journey to Flanders with Baxter's Cycling Trips, the same company I used for Roubaix. I had been impressed by the friendly service I had previously received, removing all the hassle of entering the event, finding accommodation and making travel plans. However, many others had entered and travelled to the event independently.

Another unforeseen advantage of using Baxter's again was the fact that several of the guys I had ridden Roubaix with had also entered Flanders, making it a mini reunion.

Jonathan Baxter had given us our race numbers the night before so there was no need for us to queue to collect numbers and instructions, however the organisation at the start looked pretty slick.

And so on April 2nd 2016 I heard the familiar bleep of the electronic signal recognising my ride card as I crossed the start line in Oudennarde for the 25th edition of the Ronde Van Vlaanderen Cyclo.

I was riding the medium route that includes all bergs and only leaves out one pavé section - Lange Aststraat. A couple of riders had entered the short route that rather cruelly starts with the Koppenberg. No one had entered the long route, recognising the extra 98km is all road work. 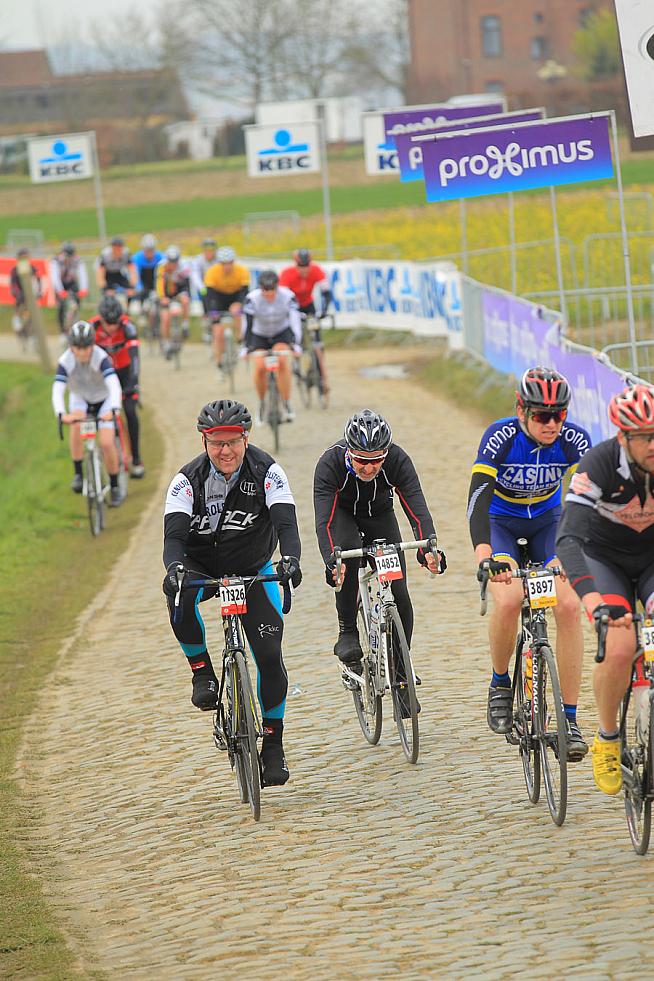 There's no easy way to do this. Photo: Sportograf

I set out with Sheldon, Sean, Ken, and Dean, all of us happy to ride at a steady pace over the course distance of 129km. After looping around the canal on cycle paths we soon covered 9km and approached the first of the hellingen of Flanders. The Wolvenberg acts as a 'gentle' introduction to what was to come. It isn't cobbled but at a length of 700m, an average gradient of 7.9% and maximum ramps of 17.3%, the statistics are typical of the bergs encountered on this iconic event and are clearly displayed at the start of each climb.

With legs warmed up the real fun starts 1km later at one of the four pavé sections, Ruiterstraat, followed swiftly by the second pavé section of Kerkgate. Immediately, memories of Roubaix came flooding back and akin to a mother giving birth for the second time, thoughts of 'What was I thinking' went through my head. I'm sure that technically, the Flemish cobbles are smoother and closer set than Roubaix, but I can assure you they felt to me just as brutal. What had I let myself in for? 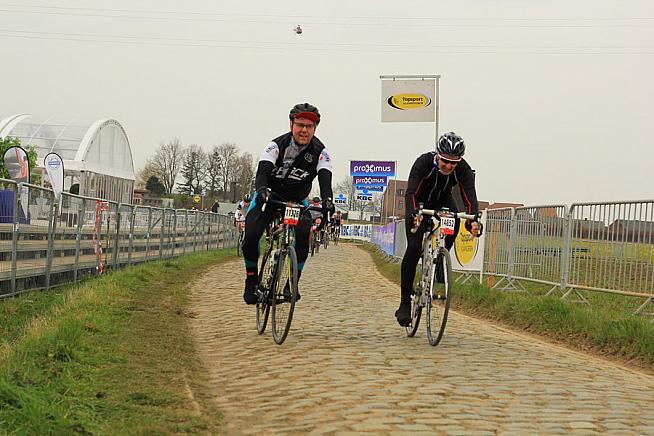 Bouncing along together. Photo: Sportograf

By the time I reached the first cobbled climb at Molenberg, the group had splintered leaving me and Dean riding together. We literally bounced up the 7% climb overcoming the 14% ramp at the start. Thankfully it is one of the shortest climbs at 500m, but long enough to get your heart pounding and breathing hard. My baptism of a cobbled climb was over, and I had just 5km to reflect on the experience and my preparation or lack of it, before the next pavé section at Paddestraat.

As my anxiousness increased during the run up to the event, not helped by lack of time in the saddle (mostly due to the fact I hate winter training, unlike Sean who had even been out for a 100 mile ride New Year's Day), I devoured all advice and tips I could obtain form the internet or from people's experiences. One of which was tyres and pressures. However, as forum after forum gave conflicting advice I had decided to go with my gut feeling and run with the tyres I used in Roubaix; Continental Four Seasons, albeit with a slightly higher pressure of 80 psi (I weigh 69kg). 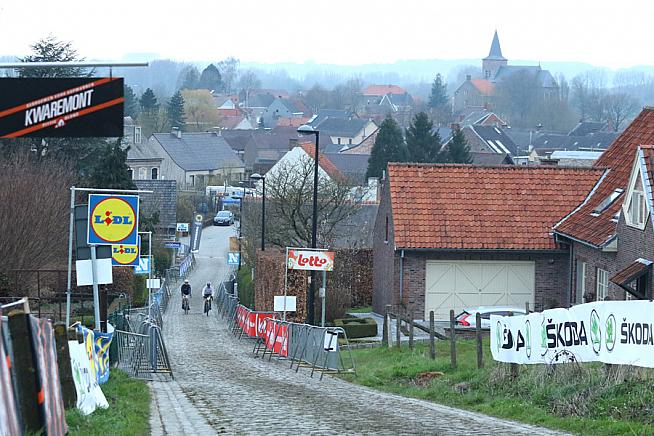 It's all uphill from here. Photo: Sportograf 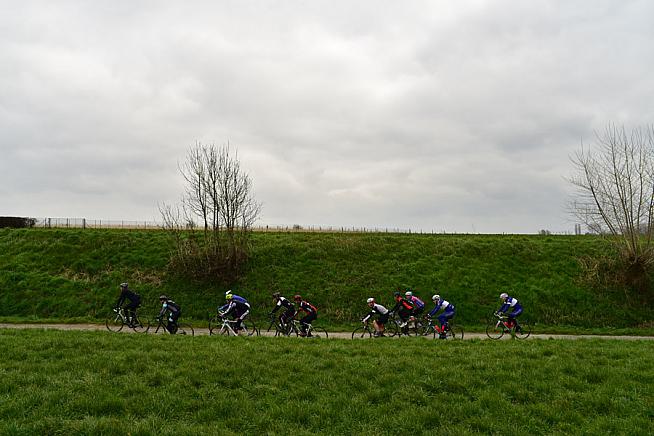 
I can't tell you if it was right or not, as I have nothing to compare it to and I'm not riding the cobbles again just for research purposes! All I can tell you is it worked for me. However, I did take on the advice of using the highest gear possible and powering through all the pavé and cobbled climbs seated. Indeed, if you did try to stand out of the saddle, the rear end took great joy in being set free to skip about like some 7-year-old.

The best advice came from my local bike shop who fitted a 32-tooth cog on the rear. "That's for when you are tired. Always have something in reserve," their chief mechanic told me. I agreed, but at the same time a voice in my head was telling me I would be using the lowest gear long before I was tired! 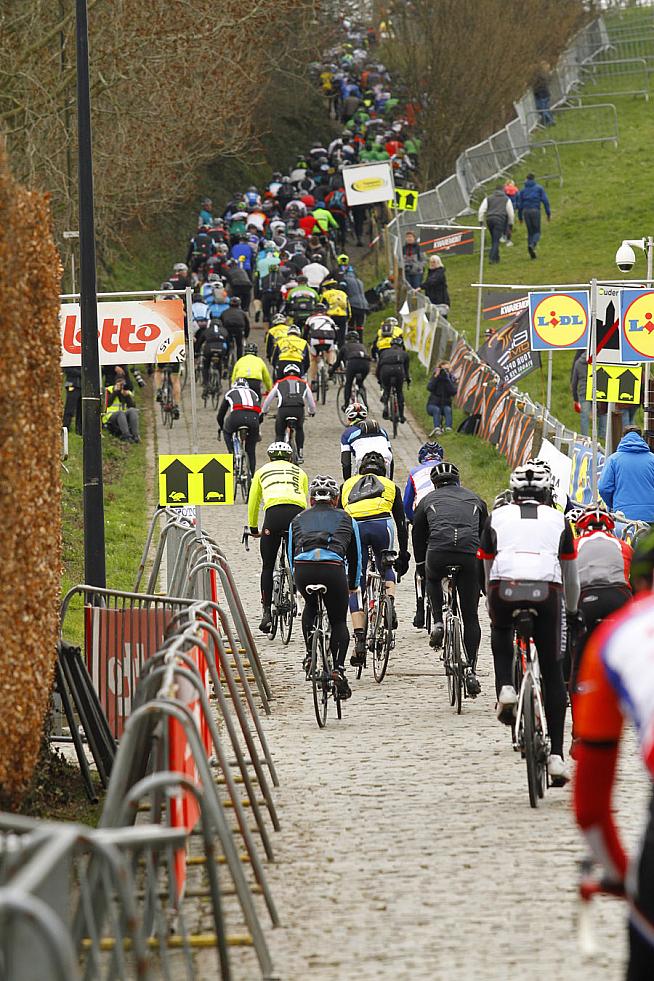 And so, with the newly fitted mechanical advantage to help compensate for my inadequate training, I attacked the course trying to keep in the big ring on the front as much as possible to stop the chain rattling on the frame.

I traversed another bone-shaking pavé section at Haaghoek before climbing Leberg, Berendries, Valkenberg and Elkenberg before the second food stop near Oudenaarde. 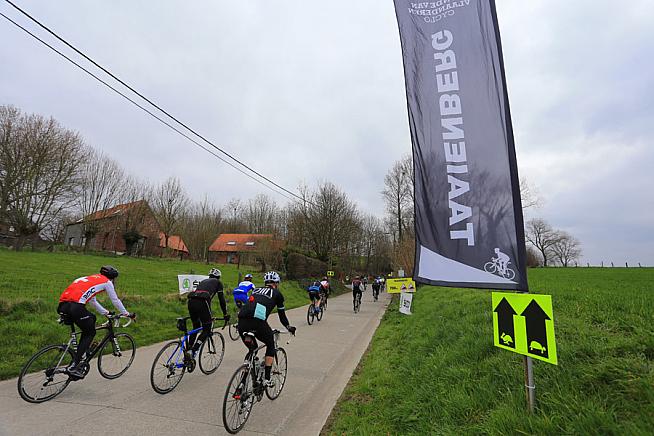 Riders gear up for the Taaienberg. Photo: Sportograf 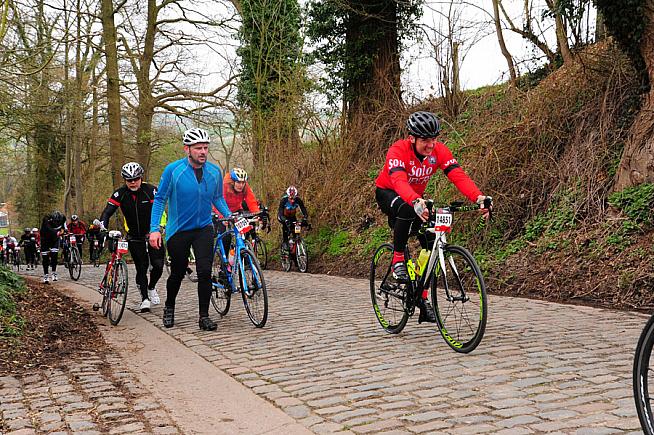 The three food stops were very well organised, feeding the army of 16,000 entrants in a fast and efficient manner. They also had mechanical support from Shimano, which saved many a rider's day. However, having the second food stop only 2km from the start of the famous Koppenberg resulted in the gathering of large numbers of cyclists that had previously been strung out. This caused an inevitable bottleneck on the 500m climb with the largest maximum gradient of all bergs at 22%. It was disappointing to have no option but to dismount and walk up the hill after the first 50m. My research had forewarned me so I had expected this and put a pair of cleat protectors in my pocket. These proved invaluable. I was able to walk up without slipping and sliding unlike many other compatriots.

What isn't so widely talked about is the downhill sections of Flanders. Obviously if you are climbing there are going to be descents. The tarmac ones are fabulous and immensely enjoyable. I can't say the same for the cobbled ones. Three km after my walk up the Koppenberg, one such downhill section at Mariaborrestraat was encountered. 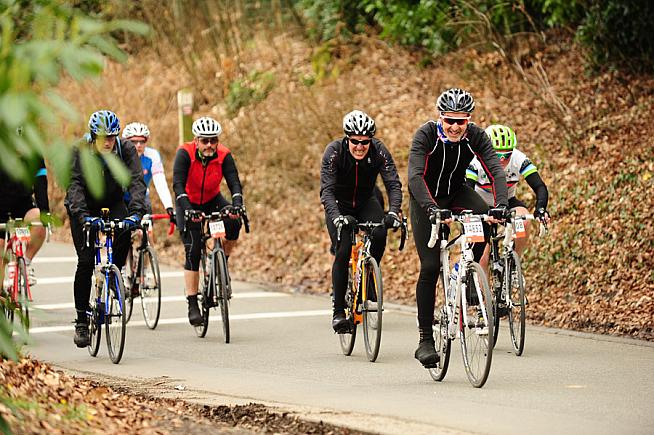 A well known theory of riding cobbles is that the faster you go the more you 'float' over the pesky things. I'm not the fastest cyclist over the flat so I have never experienced floating over cobbles, therefore I was looking forward to the fast descents. I flew down with the help of gravity and moments of bravery, yet, and very disappointingly, not once did I float over any cobble. I felt every jar, every back-breaking bump. Be warned!

As the day went on, my confidence over the terrain increased and I was actually enjoying the challenge of climbing the rock-strewn hills. 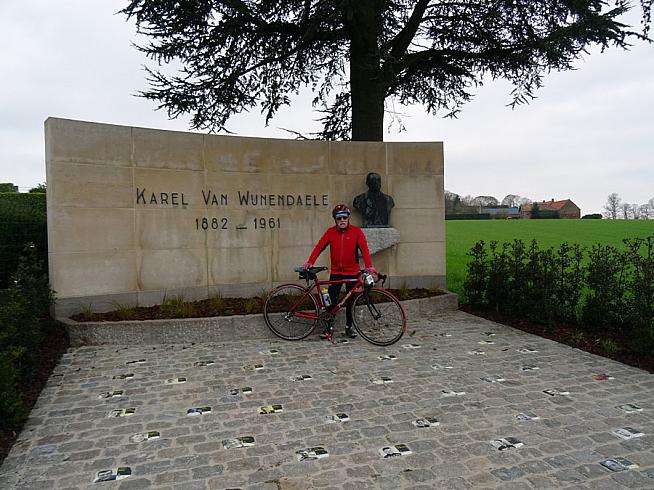 A moment's reflection at the monument to Karel Van Wijnendaele.

After summiting the crest of the longest named berg, the Karniemelkbeekstraat, I pulled over halfway down the tarmac descent to pay homage to Karek Van Wijnendaele, the founder of the Ronde Van Vlaanderen, at the monument erected in his memory after his death in 1961. I caught up with John who had the same idea. In front of the monument, cobbles have images of every Tour of Flanders winner. I took a few moments to try to imagine how hard it was in the days before technology made bikes lighter and when every rider had to fend for themselves. No team mechanics to change punctured wheels then.

The last two hills came all too quickly: the famous Oude Kwaremont, where the men's race would go over three times the next day during the 100th edition of the race, and the women's once, and the equally famous Paterberg. 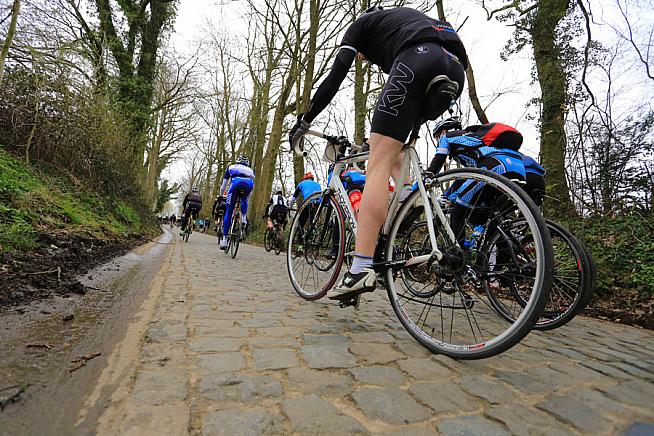 A worm's eye view of the berg. Photo: Sportograf

The approach to the Oude Kwaremont, longest of all the bergs at 2200m, is via a lovely descent by road. Then the route goes sharp right and before long you begin climbing on the concrete lane before hitting the cobbles and the steepest part of the climb at 11.6%. The gradient reduces as you approach a cobbled intersection, but pacing yourself is important so you have enough energy to complete the last 1km which effectively is a false flat.

And so on to the last berg, and in my opinion the organisers have saved the best for last: the Paterberg. It was built by a local farmer who wanted the race to pass by his farmhouse Koppenberg style. It is wider than the berg it imitates, has a higher average at 12.9%, a steep section of 20.3% and is 400m in length. The Paterberg rises out of the ground like some sort of sculpture in honour to cobbled climbs.

By this stage I was fired up and determined to ride to the top. I had completed fourteen of the hellingen, only having to walk up the Koppenberg due to conditions out of my control.

So, and unusually for me, I rode aggressively shouting 'Up Up Up' to tell riders that were walking to get out of the way and warn others I was passing.

Amazingly it worked, and I conquered the monster climb. 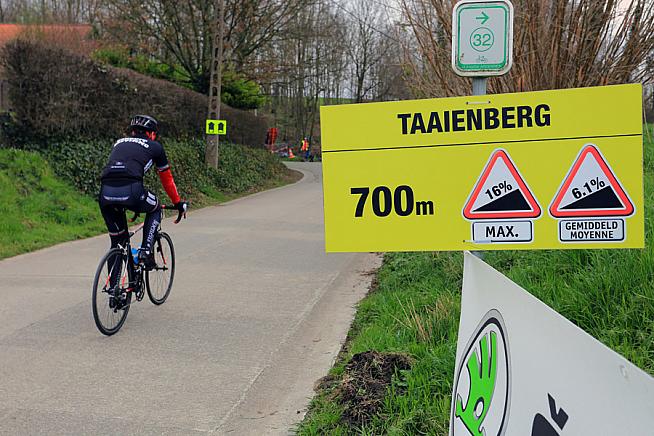 Approach to the Taaienberg. Photo: Sportograf

All that was left now was a 13km blast back to the finish at Oudenaarde along typical Flemish lanes including a lovely tree-lined road.

As we approached the inflated finish marker, Dean shouted across 'Let's sprint to the finish' to which I retorted 'I am sprinting!" I was empty.

Crossing the finish line, I had a similar feeling of achievement to my Roubaix experience. Euphoric.

I had followed the cycle tracks of my cycling heroes, experienced the exact same hellingen of Flanders as cycling's legends, and no doubt experienced similar pain and discomfort.

I had learnt that even if the cobbles are smoother than Roubaix they still hurt; going faster over them made no difference to me. And last of all, I had learnt that... I'm no Flandrien!

For more information, go to:

www.sport.be/rondevanvlaanderen - organisers of the Tour of Flanders Cyclo.

www.baxterscyclingtrips.com - the tour company I travelled with.