It began on a VERY wet Sunday morning...the sound of the rain woke me early, and others at the event reported the same, consequently it wasn't merely a fear of the climbs to come preventing my allotted beauty sleep.

I'm relatively new to the road bike; I mountain biked in my mid-teens to my mid-twenties until I became just another lazy git with a car. Last year I started riding on the road, trying to keep up with a few roadies who went out on a Wednesday on my ancient, fully rigid Rockhopper with skinny tyres. Eventually I bit the bullet and aimed for a decent starter bike: a BBQ Black Cannondale Synapse 6. The Synapse has since carried my bulk on a number of rides of up to 125km this year, such as a lap of Strangford Lough, the Dromara CC Coastal and the shorter of the two Dromara CC Hilly routes.

The Etape Mourne is a relatively new sportive in the Mourne Mountains of County Down, Northern Ireland. Two courses were on offer this year of 101km and a shorter 45km route, with event headquarters in Hilltown some 40 miles south of Belfast. The Etape is sponsored by Chain Reaction Cycles. 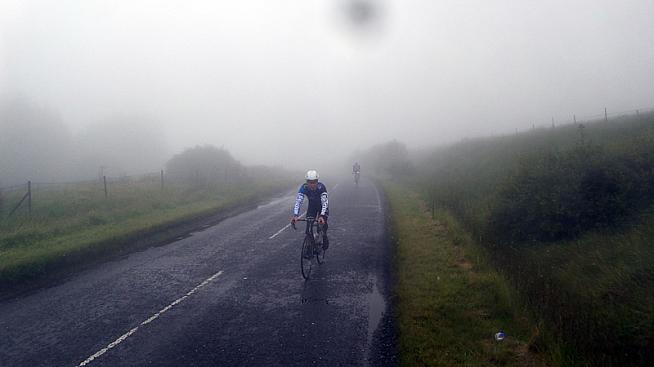 Rolling through the mist near Spelga Dam.

The event was hosted by Clonduff GAC, and when I arrived at the athletics club to collect my number and sign on, there was definitely a sense of apprehension hanging in the air along with the mist. Still, a good turnout of about 170 riders were ready to battle the hills and elements. A work colleague and her husband were there and decided against taking part. I was starting to wonder what I was letting myself in for, especially seeing as they're more experienced on tarmac.

Johnny, from event organisers Pioneer Group, gave the safety briefing and informed us the route had been changed slightly due to the volume of water and potential for gravel being washed onto the road. Gulp! 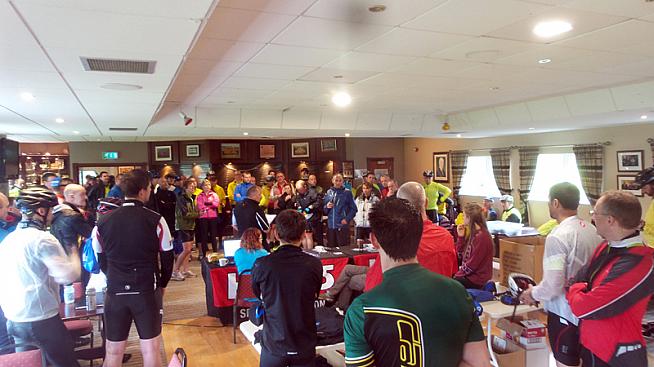 Numbers were then hastily attached to bikes in the drenched car park and the 101km riders got ready for the 10am start, with the 45km riders starting a little later, at 10:15.

The first section of the course was a flattish 20km warm-up loop via Rathfriland. Shortly after setting off, as we approached Kilcoo, conditions appeared to be getting better and I thought I would've liked my darker sunglasses lenses. However, a few miles after making our way to Rathfriland and back to Hilltown we started tackling the mountain and I began to see why the event had to be shortened later on; at this point I was thankful of my clear lenses. 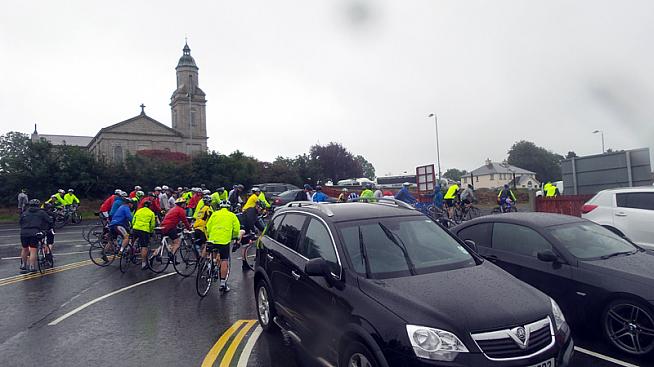 Riders set off under gloomy skies in Hillltown.

The section down towards Rostrevor taking us back on the lower road, Newtown Rd, had been removed so we aimed straight towards the Spelga climb on the Kilkeel Rd. Being unable to see the mountain ahead of us was probably a good thing as it really is a gruelling climb! Rated as a Cat 3 climb on Strava, the road climbs 259 metres over 4.6km with an average gradient of 6%. On a clear day there's some reward in the shape of a stunning view across the Mournes, but today no such compensation was on offer.

Shortly after turning onto the Moyad Road there was a feed station, I don't think many people were in need of hydration mind! The descent towards Kilkeel was rather refreshing, I'd hazard a guess that humidity was at 100% but it was quite cool and that was very welcome after cooking from within during the first climb up to Spelga Dam.

The pre-event information showed another 20km loop to Kilkeel at here, but this too had been chopped owing to the weather. Instead, riders were turned around in Attical and sent back up the Moyad Road for a second ascent of Spelga, topping out at 400 metres elevation. 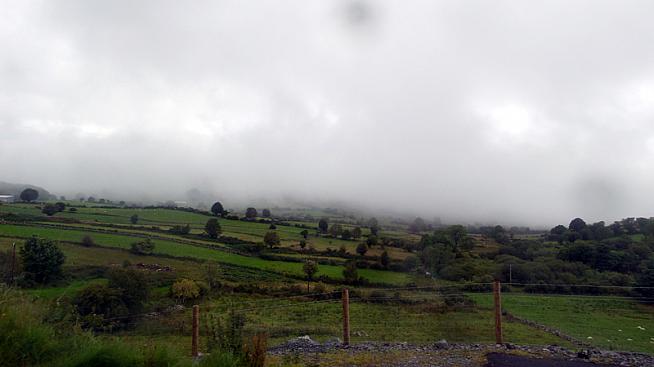 Some 170 riders braved less than ideal conditions for the Etape Mourne 2015.

The police presence on the route was very welcome, given that many drivers didn't seem to realise foglights were necessary in addition to headlights, and it was reassuring to have them passing regularly with their flashing blue lights.

From the top of Spelga we had a welcome descent down the Slievenaman Road. A lovely road with a great surface invited riders to open the throttle a bit - AND we were blessed with a break in the fog, and a chance to dry out a little! 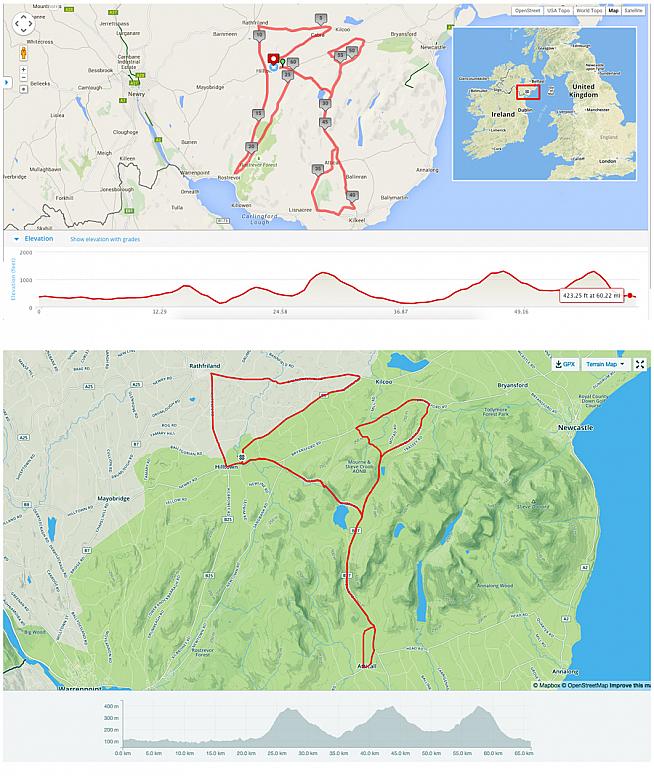 Official route (top) vs the actual route. Organisers shortened the course to 40 miles due to adverse weather.

It was a shame that the weather affected the ride, but shortening the route was probably a good call. Johnny explained the organisers' decision had been taken owing to "...difficult weather conditions - Katesbridge (used as a measuring point by BBC Weather) had 65mm of rain, the wettest place in the British Isles on that day.

We consulted with the local police, drove the course and decided to remove a leg of the route which we felt was most open to flooding/gravel etc. Given that we had no fallers I think the decision was vindicated, and the riders were all very positive about the revised route."

Actually, I discovered that one chap, Aaron McCrea I think his name was, had an off just before the return to the GAC at the end. But he wasn't too bothered, other than being annoyed at tearing his shorts and nearside bar tape! 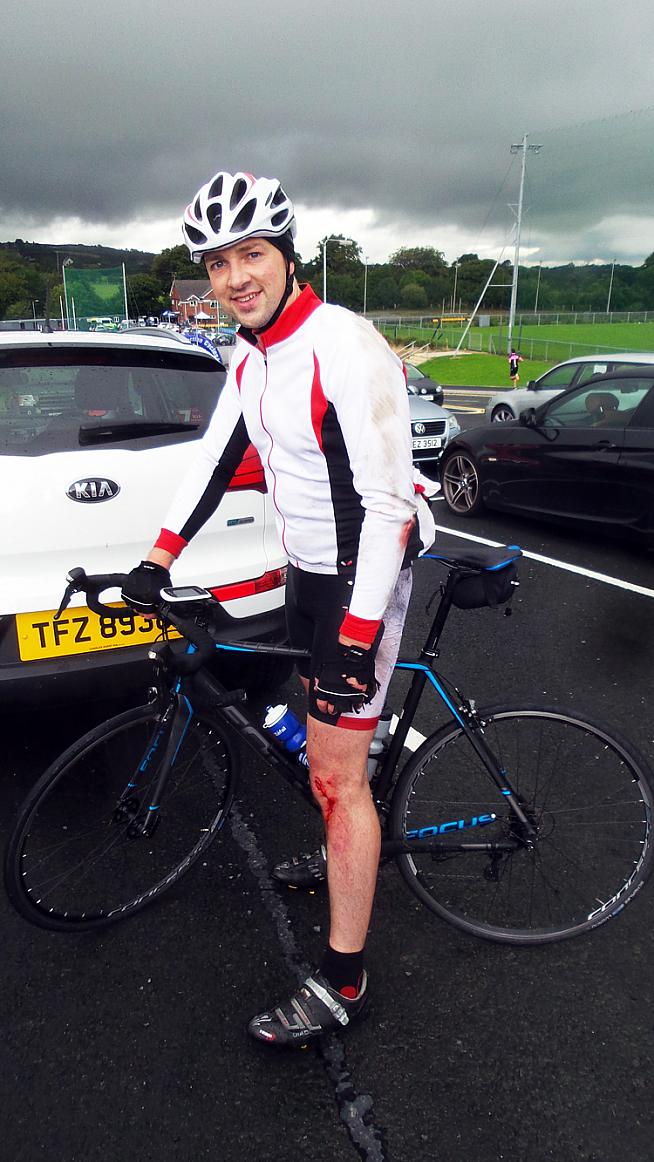 Slippy roads claimed one victim - although Aaron was more bothered about his ripped shorts than his knee!
Upon returning to the Gaelic athletic club I was greeted by the sight of some peckish cyclists getting stuck in to some sandwiches, cut into go-faster triangles of course, and plenty of hot drinks!

I'd recommend the Etape Mourne to anyone who wants to hopefully see some spectacular scenery, breathe some sweet and fresh Mourne mountain air, and see just how fast they can get their steed to travel. The Mournes offer fantastic cycling, and not just on the road - the new mountain bike trails in nearby Rostrevor are as spectacular as they are terrifying for anyone used to tarmac beneath their wheels.

As for the Synapse, I couldn't fault it on the day. I have stuck some Mavic Aksium wheels with 23c Vittoria Rubino Pro IIIs on (so I can roll and accelerate a little faster than on a factory spec bike), and I was thankful to have fitted some decent cartridge brake blocks, so I can decelerate quite rapidly too  - useful in wet conditions.

Goody bags included a top quality wicking top and Mourne Etape cap as well as the usual Chain Reaction Cycles sachets and energy gels, so I think it was well worth the entry fee.

The amended route worked out at 66km, with just shy of 1000m of climbing. A little under 3 hours on the bike in total. In the conditions that was probably long enough - but come the next sunny day, I might be tempted out again to enjoy this route in the weather it deserves.