What's the story behind the new chalk mural on Box Hill?

Hundreds of cyclists visit Box Hill in Surrey each week to ride a climb that, thanks largely to Zwift, is familiar not only to locals but cyclists around the world.

But anyone tackling the real-life climb this weekend might have spotted something different: a massive road painting in block capitals spelling 'MOMENTUM'.

So what's it all about?

The mural is part of a new campaign launched by British performance eyewear brand SunGod to celebrates the rapid growth being made in women's cycling and women's sport as a whole.

Titled MOMENTUM (no relation to the left-leaning political movement of the same name), the campaign has been launched in conjunction with this summer's inaugural Tour de France Femmes: a showcase eight-stage race for elite women's cycling that, say SunGod, "signals a momentous milestone in the profile of the sport". 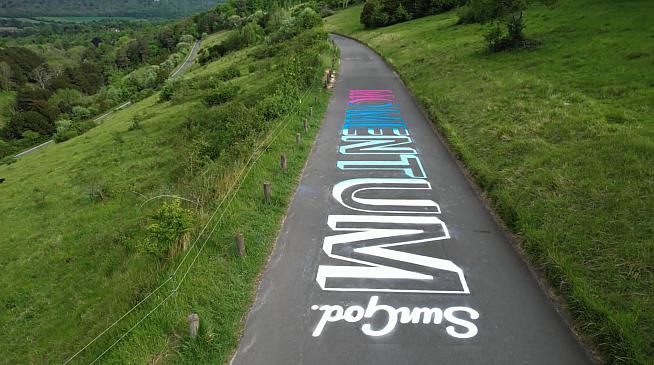 "The site of the new mural, the Zig Zag Road on Box Hill, is hallowed ground for British cyclists," say SunGod.

"One of the country's most infamous climbs, it played centre stage during the London 2012 Olympics in the men and women's road cycling races. The climb is tackled by thousands of cyclists each year with the fastest recorded climbs being times at 4mins 42secs for men and 5mins 27secs for women on Strava."

The mural is open to the public from 4pm on Friday 13th May, giving cyclists the opportunity to be part of the SunGod campaign and to ride the mural.

You'll have to be quick to catch it though - the mural is rendered in biodegradable chalk paint, so its lifespan will be dictated by the Great British weather.

SunGod, the brand behind the campaign, supports athletes of all levels, from grassroots to elite sportswomen and teams as the momentum of the sport shifts.

The teams they sponsor include Liv Racing Xstra, Bianchi Hunt Morvelo and the InternationElles.

Louise Vardeman, SunGod ambassador and team captain of the InternationElles, a women's cycling team who campaigned for a female Tour de France said: "The MOMENTUM mural is testament to the rise of women's cycling and a chance to further inspire new riders to engage with the sport.

"There is, of course, work still to be done for gender parity, but this campaign offers a moment to take stock of the excellent progress that has been achieved to date and to celebrate the momentum that has been created."

Zoe Watkiss, CEO & co-founder at SunGod said: "Momentum is the force that drives us forward and we believe something better lies on the road ahead - a sport and industry with gender equity at its heart.

"Through the mural and the wider campaign, we want to be loud, be bold and be committed to change; because the more momentum we gain, the more change we create.

The MOMENTUM campaign will run throughout the summer and will also include a limited edition pair of cycling sunglasses and film featuring Liv Racing Xstra, celebrating the progress made so far - and highlighting the work that's still to come - in women's cycling.

For more information on the campaign, visit www.sungod.co/momentum.