The Saddleback Sodbury Sportive is a popular and well-established event - but was there evidence of standards slipping slightly in the 2018 incarnation? 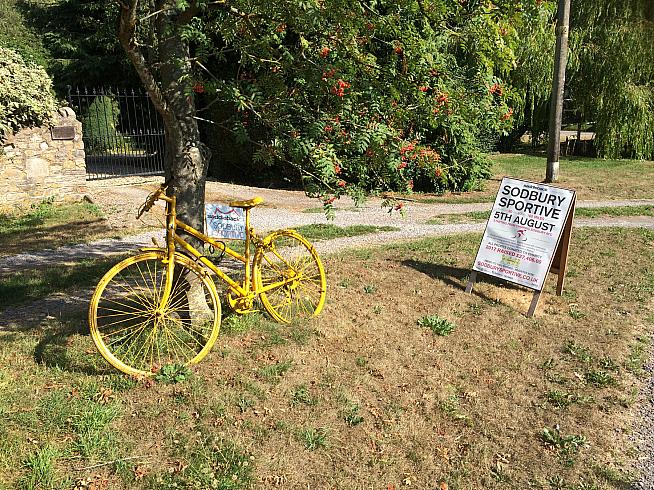 A poignant dash of Tour de France razzmatazz in Sodbury.

I think this was my fourth time riding the Sodbury Sportive,  which starts and finishes on the edge of the Cotswolds at Chipping Sodbury rugby club. It is organised by the Rotary Club of Chipping Sodbury and sponsored by Bristol-based cycling distributors Saddleback.

The involvement of the Rotary Club ensures a small army of volunteers to assist at the sportive and make it one of the best I have experienced in the South-West. There has always been attention to detail, such as potholes marked throughout the route with fluorescent yellow paint, and various bikes also sprayed yellow and sited in gardens all around the course to add to the event. Not to mention the famous pliers at the start to trim the cable ties that hold your ride number to the handlebar. The ultimate marginal gain!

In addition to the detail the route has stayed the same on the editions I have ridden. The organisers carried out a rider survey a few years back seeking opinion on a change of parcours, but as nothing has changed I assume that most were happy with the status quo. There are courses covering 30, 60 or 100 miles (actually 102 miles) and the routes are well thought-out. If the number of participants is holding up then I would agree that why change something that is working and proving popular. The 100 mile route included 1900 metres of climbing, compared to 1093 metres and 494 metres on the 60 and 30 mile courses. 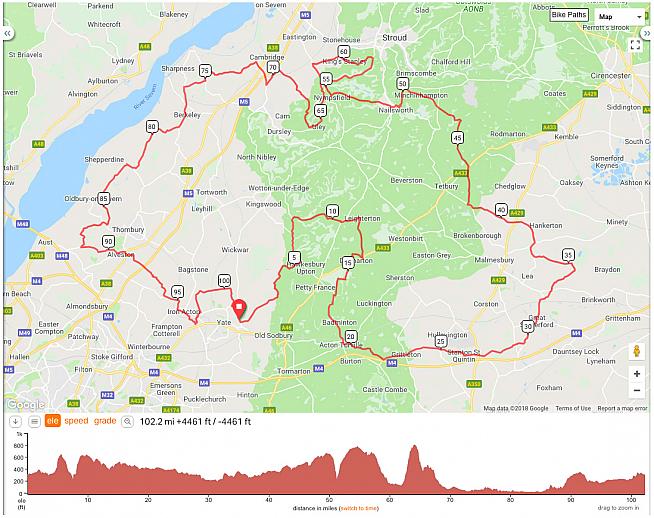 The 100 mile route packs most of the climbs into the first half.

So far so good, it sounds like a successful, well run event - and it is. But there were a couple of areas this year where improvement could have been made. The first was in getting riders on the road.

Registration opened at 7am and there were plenty of parking spaces on the rugby field. Sign on was also simple. No queue. Tea, coffee and biscuits all available. The problems only started trying to get away on the route. Release time for 100 and 60 milers was between 8-9am. Those on the 30 mile course were set for 9-9.30am. I joined the back of a queue at 8.05 am. It was already snaking all through the immediate event field so that it was hard to actually see the start. There was also a big red lorry parked right in the middle of the field. This turned out to be the stage for the post-event music band. However, the queue split either side of the lorry so there were effectively two lines feeding into one. 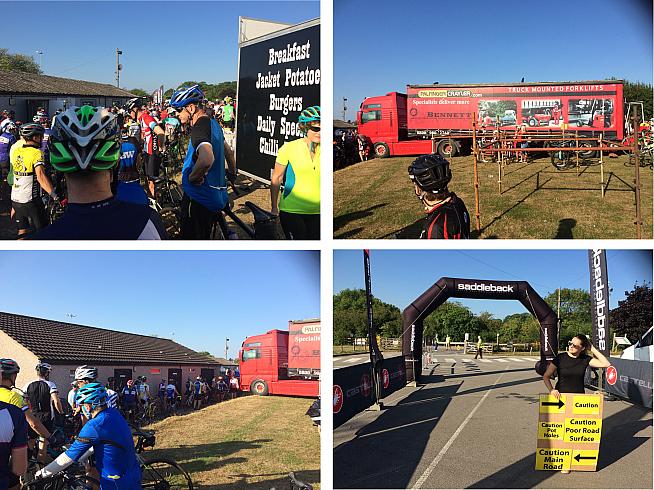 Who the forklift this lorry here? Start line queues at the rugby club.

The pre-event briefing manual that was emailed out stated that the starting pen held fifty riders at a time. I'm not sure of the number of riders at the event but I believe the limit may be 1000. Suffice to say it took 35 minutes from joining the queue to getting on the road. I don't recall the waiting time being as bad in previous years but that may be because I arrived closer to 9am than 8am. I also seem to remember that they may have had a split start pen before. This enabled two pens to load side by side, listen to one briefing and then release both in short intervals. Maybe those on the 100 mile course could be given a start time commencing from 0745hr and 60 milers commence from 0815hr in order to improve the situation. Some of my friends rode the 30 miler and they reported no problems in relation to delays at the start.

Despite the wait the weather was hot and sunny which helped make it a good day in the saddle. After the initial blast across Sodbury Common with free-roaming farm animals the climbing commenced. The route is front loaded with several short, steep climbs coming within the first ten miles. Each of these climbs is marked with Strava flags at the beginning and end - a nice touch - and there is also an information board at the start of each detailing the name of the climb - eg "Hawkesbury Howler" - along with the total length, average gradient, maximum gradient and total ascent.

For newcomers, one of these climbs, the "Alderley Grunt" probably comes as something as a shock because it is literally the upside of a "u" shaped road but you can't see it until you are on it. One minute you are hurtling down a steep descent and then, too late, you are on to an equally steep ascent usually still stuck in top gear. Hence, I suppose, the "grunt" of surprise. Many have had to unclip as they come to a sudden stop as the gradient reaches 20% in places for a short time.

After the three climbs the 100 and 60 mile routes split at the eleven mile marker. Things settled down to a more even keel on the long route for a time, although it also joins part of the 30 mile route at one point.

The first feed station on the 100 mile route was at 32 miles. Unfortunately, this was the second disappointment of the day as it was slim pickings at all of the three food stations on the route. (The other two were at 65 and 91 miles). The ride manual stated:

"Food station provisions include water, energy drinks and squash, jam or Marmite sandwiches, homemade flapjacks, fruit cake and malt loaf, mini bars from Marshfield Bakery, jelly babies and some savouries. But they are only intended to top-up your own food which you should carry from the Start."

Fair enough. From experience I always take a fair amount of energy gels and hydro tablets onto any sportive. All of the aforementioned foods did make an appearance as well, but not all at the same time. Bananas aren't mentioned, but they are generally a sportive staple and have always been provided on this event before. However, I got to the first feed station and was informed that they had "run out" even though I was by no means the last one through.

Avoiding the urge to break into song "Yes! we have no bananas", I ended up with some jelly babies and a bit of flapjack. By the third feed station it looked like you could have anything you wanted as long as it was a sandwich. On such a hot day, after 91 miles, my main craving was for salt but there was nothing to scratch that itch on the menu at that time. 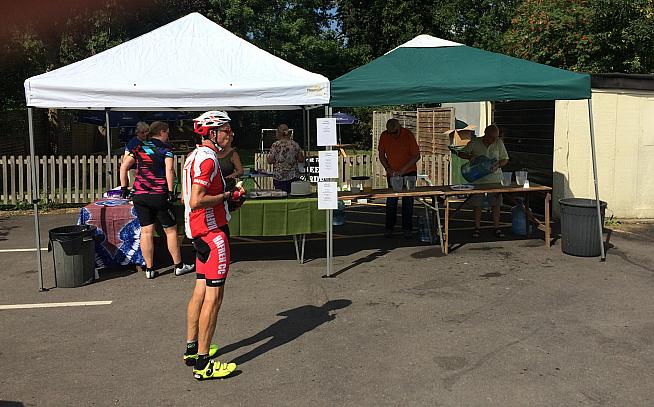 On the positive side, some people were loving the jam sandwiches and the problem in my mind was quantity and variety not quality. Lots of the items were home made and a lot of people had obviously taken time to prepare it. It was also well presented as the sandwiches were under protective netting and not left to the mercy of rogue flies as sometimes happens. The drinks were always plentiful at each feed station be it water, energy drink, tea or coffee. However, whether it was logistics or just choice, for me the refreshments could have been improved.

On the 60 mile course there were two feed stations and one on the 30 miler. Having the last feed station on the 100 mile course only nine miles from the end was either a blessing or a curse depending on your mindset. It is either only a short burst to the end or a welcome prolonged stop that it was hard to get going again from.

The route went up gradually to Minchinhampton Common with more free-grazing animals. A descent into Nailsworth was followed immediately by the Nailsworth Nailer climb. This was quite steep in places and goes past Forest Green Rovers FC followed by a series of tantalising false flats.

The main climb of the day came just before the second feed station at Frocester Hill. The climb is only included on the 100 mile route and averages 8% for one and a half miles. It's a grind but always holds the interest with several bends opening up to new scenery. Once at the top it was a fast descent into Uley. 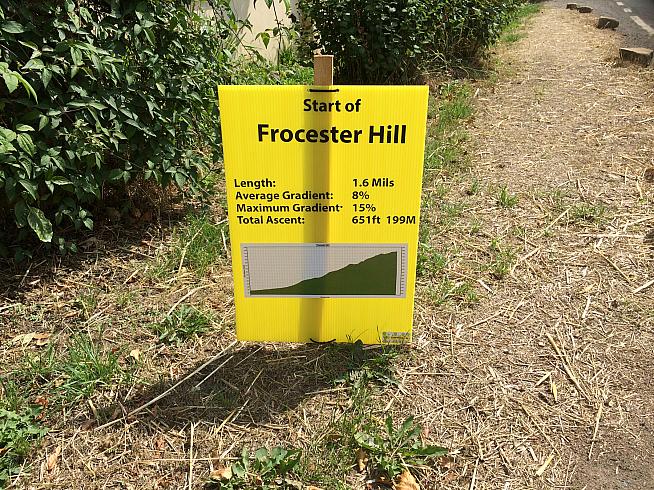 Nothing a jam sandwich won't take care of.

After the second feed station there is a long flat section at sea level that runs parallel to the River Severn. In some ways this is a psychological challenge because the gradient doesn't change and your mind can wander to thoughts of aches and pains, although it is still just too far from the finish to see the end.

There is a short climb to the final feed station and then a fairly simple and interesting little run to the finish. As each rider crosses the line there is an army of cowbell ringers to greet them before you receive a medal and a voucher for a pasty and beans and a cup of tea or coffee. On this occasion I didn't partake just because I didn't feel like such heavy food in the heat and I also had to get home fairly quickly, but the atmosphere at the finish line was a welcome reward at the end of a long ride. 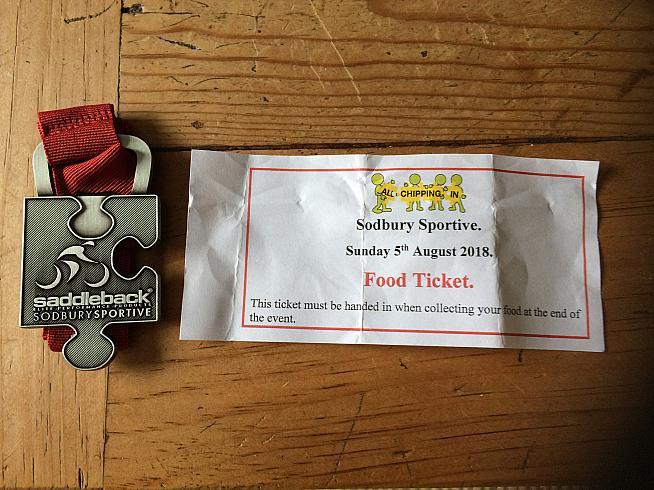 Got the medal - passed on the pasty.

The band were in full swing on the back of the red truck. There were lots of families, friends and supporters of the riders around at the end. It is definitely an event that is bigger than just the ride itself: unlike some other sportives, it is also a social occasion to be enjoyed.

I have had a good time on each occasion I've been involved in the Sodbury Sportive, and this year was no exception; there are just those couple of little areas that, in my view, need to be considered to maintain the quality and enjoyment across all areas of what is generally an excellent fixture on the sportive calendar.

Find out more about the Saddleback Sodbury Sportive at www.sodburysportive.co.uk.