There's something about the words 'London to Brighton' that conjure up the stuff of myths in the minds of most cyclists down in the South East of England.

For some it's the furthest distance that they will ever ride; for others it's the gateway drug into long-distance sportives, club runs, and maybe even a career in cycling.

The really cool kids use it as a moving pub crawl riding the biggest bag of bolts they can find with brakes audibly squealing from half a mile away! In all cases it is a real achievement. 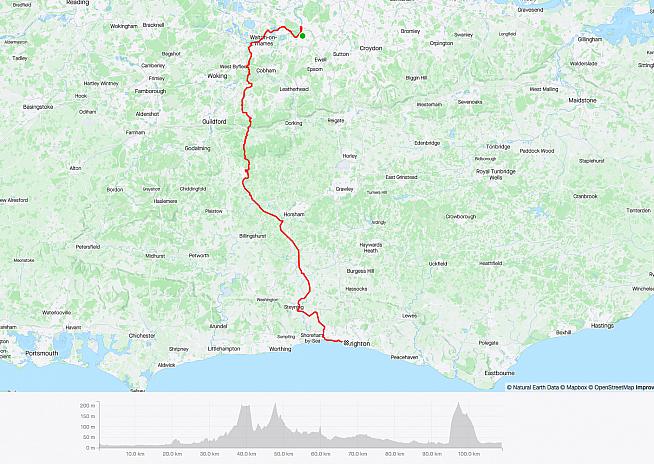 London to Brighton Off Road offers a fresh look at an iconic cycling challenge.

For me, London-Brighton became the gateway drug. As a child I would sit each year at the same spot by the road encouraging riders in the annual British Heart Foundation charity ride - for many years with my grandparents, and then later alone as a way of remembering them. But always as a spectator.

I was only really prompted into doing it myself back in 2014, by my then-girlfriend saying I was running out of excuses not to do it. The first time I did a London to Brighton ride and went past that spot, I admit that I burst into tears. I then turned right around and signed up for the night ride a few weeks later. Everything else - club runs, hill climbs, time trials - they all spun out from there.

I'd considered doing the BHF's London to Brighton off-road ride, but I wasn't sure in myself. Too far (around 100km), too difficult in terrain (chalk, rocks, goodness knows what else), no mountain bike. I had a gravel bike, but wasn't sure if that would get me over some of the rockier stuff. Then I remembered it's London to Brighton and there's no shame in walking up in places. That's half the fun!

Alex and I were basically the last ones off, rolling out of Apps Court Farm at 10:11am according to my Garmin. We were told that if we didn't make it to Southwater by 4pm we'd be pulled off course. Just under six hours to do quite a lot of distance off-road would force us to be business-like. 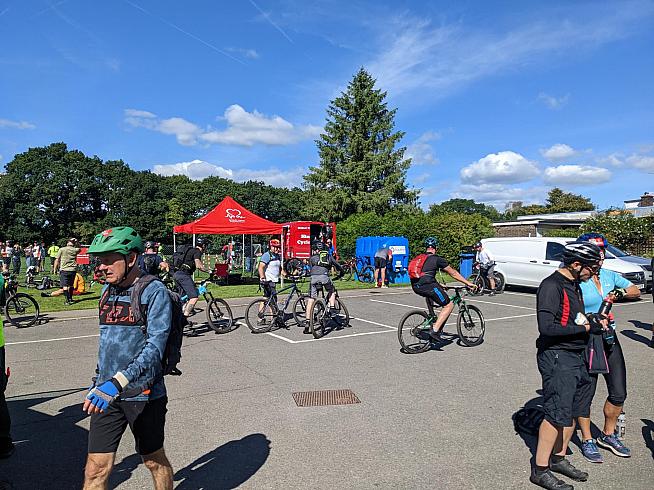 A mix of gravel and MTB bikes took to the start line for the 105km ride.

Starting off you come straight off a field and along the Thames. Pretty idyllic to be honest - half expected Ted Lasso to be filming on the other bank! A few of our fellow late starters were doing jumps and even wheelies. If this was London to Brighton off-road then this might be all right.

Then we turned southward, away from the Thames and towards the North Downs. That's where things changed. We came back onto the road and things started going upwards. Alex and I had big chainrings on so we quickly dropped the mountain bikers. We only saw them once again after that. It got lonely so we ended up pausing to ask a walker where exactly we were - a disused airfield used for kitting out passenger planes back in the 70s, it turned out.

We got to the top of one ascent in the North Downs and we had a choice of two descents - easy or technical. Given our tyres and tiredness we went for 'easy'. After 15 minutes of walking down ruts, gravel, gullies, and possibly bears(!) we came to the first stop. If that was the easy descent I never want to see the technical one.

The first feed station arrived at Shere, some 40km into the ride. We hadn't brought any food, so that ham and cheese sandwich after two hours of riding was like manna from heaven. I don't recall much from the next few hours, just soft sandy climbs followed by hard rocky descents. I only had one crash. It was my own stupid fault, I picked a bad line through a slow climb and picked a piece of sand where my front tyre just came to an immediate stop; fortunately I fell straight onto my own feet and one hand and didn't pull any muscles falling. 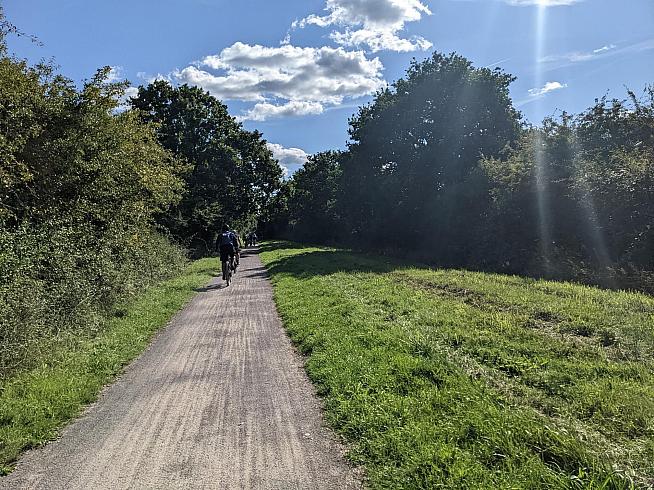 The route varies from flat downslink paths to rocky climbs and descents of the South Downs Way.

When we got to Southwater Alex, who was the one originally supposed to write this article, lay down on a bench and said "I'm done". He had been flagging for a few miles on the flat and I could tell something was up. I stayed with him for long enough for him to call home to his wife for rescue. Then, fortified with what you may consider an unholy alliance of chewy and crunchy (Reeses Pieces and Haribo in the same bag) - I continued on. Alone.

The next few miles were a blur. I put the hammer down to get as much time back as possible. I ate my snacks straight out of my top tube bag finding myself wanting chips in there instead. It felt like I was consistently hitting 35km an hour on gravel which was a rarity for me. My strava stats proved I was motoring along - PBs falling everywhere despite the distance I'd already travelled. 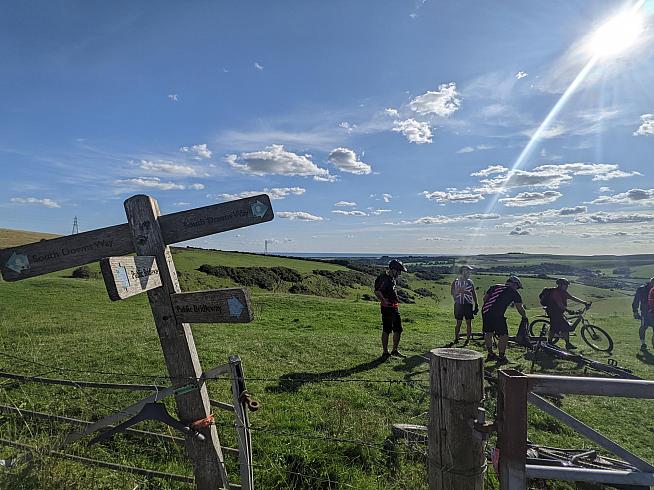 Brighton almost in sight as riders reach the South Downs.

Then we got to Truleigh Hill. There's two ways you can take it - either a mud/dirt route or the rocky route. Both lead you to the same second section of road. Normally I'd never tackle the rocky route even downhill. It's like someone had taken a giant spoon, used it to gouge out the chalk, and then thrown fist sized rocks down it.

I knew it would be nigh on impossible to tackle it with gravel gearing and I was proven correct. That first section had a considerable walking portion to it but we were all rewarded for our efforts with the views from the second section.

Unlike with the traditional London to Brighton route you do spend quite a bit of time riding along the coast. We even got stuck at the Shoreham locks waiting for them to close! But the then-girlfriend I wrote about above was there at the finish line - as she always wanted to be all those years ago, but now as my wife armed with pretzels, Fanta, and chips. Wives saved the day for both of us.

All in all I would recommend the London to Brighton offroad ride. It was a well organised event and it was great to see so many community organisations come out to make it special for us all. From my experience it's the toughest of the three that I've done so far - a real achievement even for those who consider themselves 'serious' cyclists.

Now - off to find some spare room for my medal... 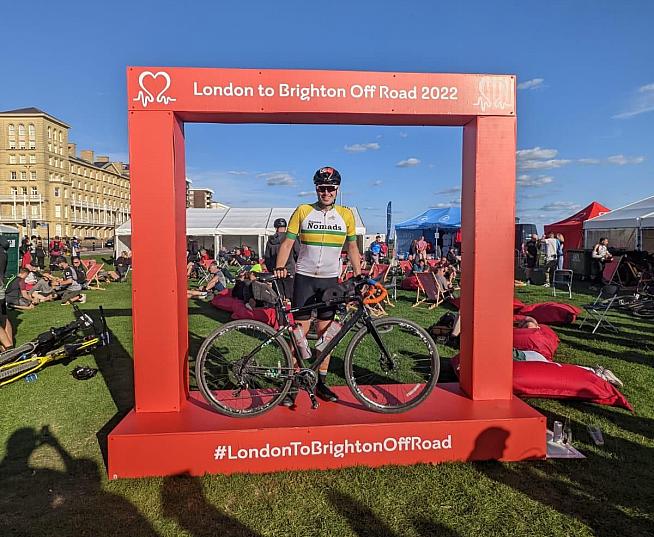 A well earned memento at the finish line in Hove.

Find out more and enter at www.bhf.org.uk.